Why would I want multiple accounts simultaneously?

You might want to keep your work Google Apps for Business and personal Google Drive or Google Docs accounts separate.

If you are running a backup server, you might want to sync everyone on your Google Apps domain to the server, but keep their data synced to separate folders.

Perhaps you are a web-designer or consultant and work with various different customers at the same time, and need to keep their data in sync.

Previously Syncdocs only let you sync one Google Drive or Google Docs account at a time. You could switch accounts, but not use both concurrently.

To setup multiple accounts for Google Drive in Syncdocs, do the following.

1. You’ll need Syncdocs version 1.23 or later. If you don’t have it, download and install the latest version
2. In the Preferences -> Account Tab there are two new buttons, marked “Make Shortcut” and “Use Now” 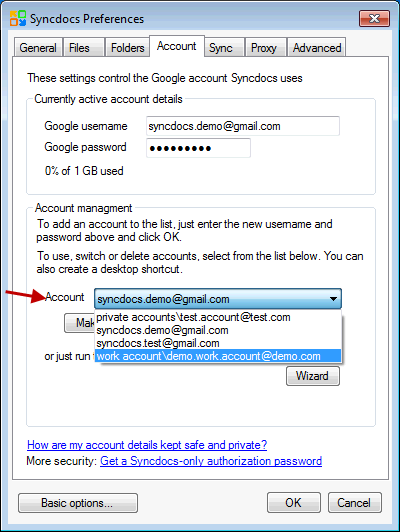 4. “Use Now” button runs that other account concurrently when you press the button.

5. “Make shortcut” button makes a shortcut. This shortcut runs the other account. The shortcut is put on your desktop, but you can move it where you want. The shortcut is shown below. It is given the title of your gmail account (“syncdocs.test” in this case) so you can distinguish it.

You’ll see a different colored shortcut icon on the taskbar for this other account.

You can have as many accounts running concurrently as you wish.

Things to watch out for with multiple accounts

Watch out for confusion with multiple accounts running at the same time.

If you hover your cursor over the secondary taskbar icons it will show you the account name, and the name is also shown at the top of the menu in blue:

The name of the account is also shown at the top of the status menu: 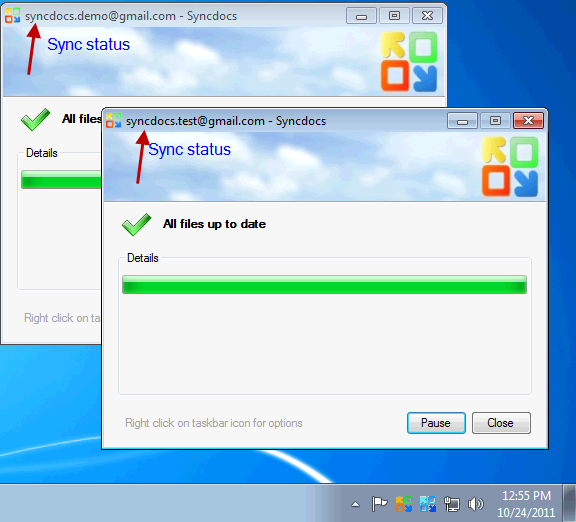 13 Responses to How to sync multiple Google Drive accounts concurrently